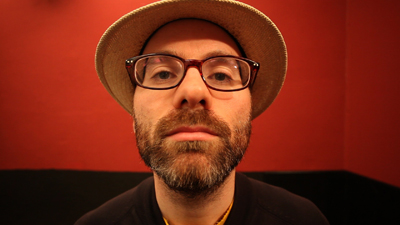 Born in Atlanta, Georgia, in 1978, Geoffrey Garrison grew up in Houston, Texas. He studied art at the Cooper Union for the Advancement of Science and Art, in New York City, graduating with a BFA in 2001. Having spent a year at Städelschule in Frankfurt am Main, Germany, he returned to Europe in 2002—this time to Berlin, where he began working in performances by the choreographer Xavier Le Roy. From 2004 to 2005, he was a Fine Arts Researcher at the Jan van Eyck Academie in Maastricht, the Netherlands, where he produced the twenty-minute video The Cut (2005) and the screenplay Freud's Doppelganger (2012). Both deal with the 1962 John Huston film Freud the Secret Passion, a biopic of Sigmund Freud that was written by Jean-Paul Sartre and starred Montgomery Clift in the title role.

An Infinite Night (2008) was created during Garrison's fellowship at Künstlerhaus Büchsenhausen in Innsbruck, Austria, in the winter of 2007 to 2008. The Cut and An Infinite Night were exhibited at the 11th and 12th Videonales at Kunstmuseum Bonn, in 2007 and 2009 respectively. Recent works include A Picture Gallery (2012), which was shot and exhibited in a set built at MMX Open Art Venue in Berlin in November 2010.

Geoffrey Garrison is interested in how fictions shape our understanding of the world. Based on a belief in the inadequacy of representation, his works focus on dead ends, erasures, free associations, and the lacunae in fictional and historical narratives. In addition to visual arts, Garrison periodically writes and performs music. He has been known to pen an essay or two, or translate from German or Dutch to English. Geoffrey Garrison lives in Berlin with his wife and son.